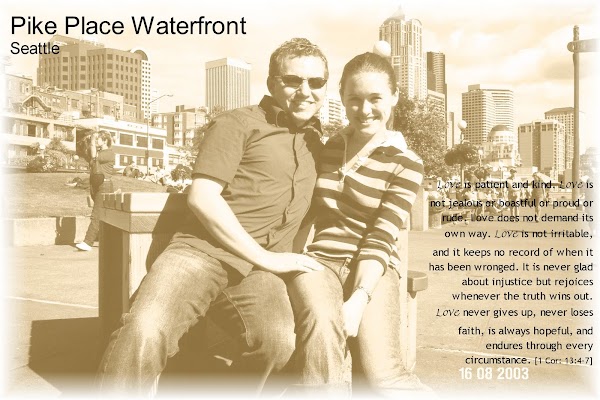 There’s really only three reasons why I never dated, and when I finally decided to enter into a relationship with Alexis, I decided to “court” her instead.  The first reason was all about being intentional, I had intentions, if I was going to “date” it was going to be with the intent to see if marriage was the real deal for us. Second, I wanted to make sure we had shared our callings, that they were compatible, and about serving the Kingdom. Lastly, to ensure there was honor and respect in our relationship, that it wasn’t just about “having” the girl, or “being” the man – that I was honestly seeking to honor her in my actions, and her actions honored me – and through we gave respect to one another.

Intentionality is a word that I put a lot of focus on, I always desire that my actions have a real intention to them, that’s it’s not just “going through the motions” and so I decided I didn’t want to date – dating was like “trying” on clothes and didn’t really seem fair to anyone – humanity has enough problems, I don’t need to be nonchalant in my relationships, and certainly not someone I may end up marrying! So I was intentional, I wouldn’t date, instead I would court – seek to understand a person at their deepest parts (of course I had zero idea how to do this, and in my young pride thought I was so great)… that didn’t really happen well – but I tried, the heart counts!

Another thing I tried very seriously to understand was Alexis’ calling, what she felt God leading her to do, what she thought she was gifted in, etc. Again, something I was far to idealistic about, I probably put more pressure on her than was necessarily good, but in the end I certainly made a point that I was serious about what God was telling me! It was during our courtship that I heard the Lord tell me I would be a pastor – almost nine years later I’m not quite a pastor by “title” but I know it’s where I’m headed. As for her, she’s got an amazing heart for the world, for people, and for serving the Kingdom and seeing people awaken to the Kingdom life.

Then comes what I consider the most important piece giving honor and respect to the relationship, not just to the person you’re courting, but the relationship itself, don’t go fast, explore, learn, grow. I know, it’s wishy washy, and you might be burning with “lust”. Don’t awaken love before its time (Song of Solomon 8:4) let it mature, let others give you advice and wisdom, be transparent from the beginning, and when love finally arrives you’ll know it, more than ever. Every couple will look different, but I’ve never seen a couple who gave respect and honor to the relationship by allowing God to teach and the Church to cultivate (a healthy circle of Kingdom friends/mentors) blow up into a statistic – they’ve either maturely went their ways or entered into a marriage built on a foundation of trust, respect, and honor – which is hard to break apart, even when someone makes big mistakes.