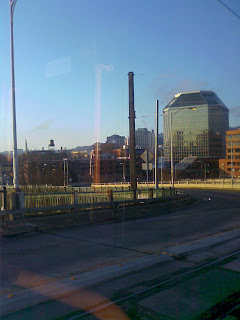 This is from my ride to work, just a little something.

I drink, and I like it. I like all kinds of beers, even though half the time I don't know the difference, and I admit I pretend to care to seem "in the know" but really I don't care. I like hard liquors too, and mixed drinks, oh, and wine too!

It's been a little while since I've written about anything controversial, so I thought why not an age old Christian culture taboo. You see, for me alcohol is something I could take or leave, not a biggy to me. It's true, just ask God, I've never been drunk, only once I felt like "hmmm, I feel it, that's enough". But in general the controversy around the issue in christian circles is, from my observation a bunch of hyper spiritualism that does more to divide then to love.

I'm incredibly thankful to have a church family that isn't hyper active over the issue. Instead our church is in tune with the needs of people and due to the stumbling factor (the general feeling in christian circles), pastors don't drink alcohol. We also have minitries to people who struggle with alcoholism, so it would be pretty difficult to help those folks out… not impossible but more difficult due to the perceptions people have mixing church leadership and alcohol. Sure it would be nice to live in an understanding world, but we don't – move to europe.

Anyway, all that to say, are we going to love first and force our convictions on others or are we going to love first and seek an encounter with God? Don't go watering down the truth though, and mimicking the world, or go about looking "good" – that's the same as dividing yourself. Instead, use the spirit God gave you to bring a new life to others right where they are, maybe even at a bar.

From time to time I feel like flying off to someplace where nobody else on the planet knows where I am nor are they able to get ahold of me. The only problem with this is that I know about 5 minutes into said disappearance I would miss my bride and daughter terribly.

So instead I come back to reality and focus on what I really love, what God is saying, and the amazing things that He has done, is doing, and will do. Which when I think about all that I am humbled and filled with excitement. I'm also content with everything because I don't need to worry, just obey and all is well, even if my nature wants to run.

Alexis and I have been doing research for the past few months on home loans and on Friday came to the conclusion that we simply can't afford to buy our existing townhouse that we are renting. We love it and would but it if we wanted to spend close to half our take home pay in loan payments…. but as insane as we can be with life, that is something we just don't think is wise.

So we started looking for homes that we can afford, there actually are quite a few in the sub 200K range, many of them either short sales or foreclosures. We actually found an amazing deal on a 2600 sq ft 1971, fully renovated, split level, and we began to pursue it. Things were looking possible until today when I looked into the balance of our investments thinking "aw they couldn't be that bad"… oh they are – over 50% loss in value. So now we don't have the amount needed for our down payment. The cool thing is that if you're buying a house this year (before the end of Dec '09) there is an $8,000 tax credit. So even if we borrow from family we need we can reimburse by tax return time next year.

This is disapointing but we know it means that God has something more perfect for us. Something that will propell us into our ministry in Poland even better than we thought. Because we know this we can actually be excited.

It's overwhelming and stressing and still we have a hope that is unexplained. Thanks for your prayers and thoughts. We know the provision will come in, always has. 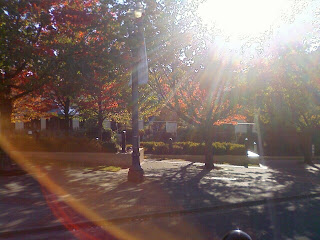 Had to deboard Max and transfer to another because the ticket machine was broken. But this is what I saw… quite nice. 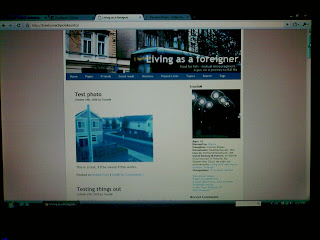 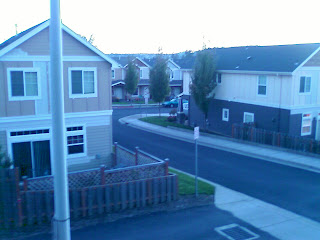 This is a test, it'll be sweet if this works.